No One Person Can do Everything

In today’s first scripture reading (Exodus 17:8-13) at church, Moses received help from the men who were with him:

In those days, Amalek came and waged war against Israel.
Moses, therefore, said to Joshua,
“Pick out certain men,
and tomorrow go out and engage Amalek in battle.
I will be standing on top of the hill
with the staff of God in my hand.”
So Joshua did as Moses told him:
he engaged Amalek in battle
after Moses had climbed to the top of the hill with Aaron and Hur.
As long as Moses kept his hands raised up,
Israel had the better of the fight,
but when he let his hands rest,
Amalek had the better of the fight.
Moses’ hands, however, grew tired;
so they put a rock in place for him to sit on.
Meanwhile Aaron and Hur supported his hands,
one on one side and one on the other,
so that his hands remained steady till sunset.
And Joshua mowed down Amalek and his people
with the edge of the sword.

I was struck by the reality that Moses, a human, had limitations. He grew tired even as people depended on him. As a leader, he needed help. He couldn’t let his people down but he couldn’t do his work by himself.

In this story, we don’t know if Moses asked for help. Aaron and Hur seemed to move into action, taking their own initiative, to support Moses. Perhaps they knew what would happen if they didn’t intervene. Moses also didn't say, "Leave me alone. I've got this, guys." He was humble enough to receive assistance. While the grace of God was flowing through Moses, God’s grace was also with Aaron and Hur. They were inspired to act. For me, the point is that while Moses always gets the credit for being a prophet and leader, he didn’t do it by himself.

In many places - a faith community or the workplace, for example - there might be an appointed leader but everyone has a responsibility (and hopefully opportunities) to share their gifts, whether they are gifts of the head, hands, or heart. Sometimes it's nice to be asked to help. But sometimes we know the right thing to do and need to just do it. Step forward. Don't wait to be asked. No one person can do everything, but many people working together can do great things. 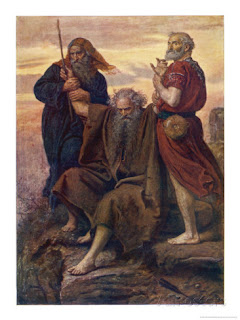